Home » News, Views, Features » “The Singing Undertaker”: When Covid struck with a ban on Congregational Singing at Funerals in Wales, Co-Op Funeral Director James Murray from Mumbles stepped up to the microphone…

“The Singing Undertaker”: When Covid struck with a ban on Congregational Singing at Funerals in Wales, Co-Op Funeral Director James Murray from Mumbles stepped up to the microphone… 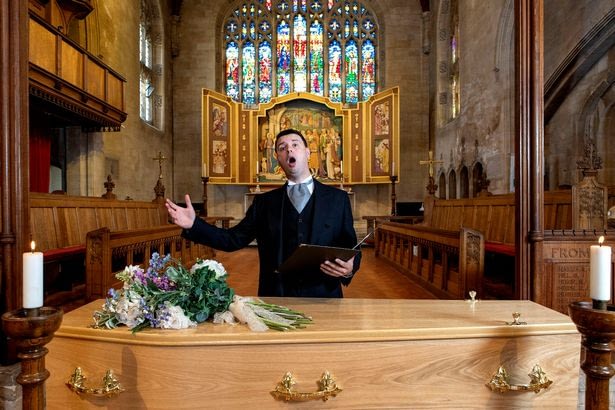 When lockdown hit and there were restrictions on numbers at funerals and a ban on congregational singing in places of worship, James Murray, who is based in Mumbles, stepped in to help families better remember their lost loved ones.

Losing a loved one is one of the darkest days imaginable for anyone, and their funeral is undoubtedly the hardest.

And the Covid pandemic made things even worse for families who were not able to give their loved ones the send off they would have liked.

Restrictions imposed by the Welsh Government in a bid to clamp down on the spread of the virus saw limits imposed on the number of people who could attend services, along with on congregational singing in places of worship.

But one Welsh funeral director decided to take it upon himself to do something special in order to give late family members a better send off.

The 35-year-old, who works for Co-op Funeralcare’s William Pressdee Funeralcare in Mumbles, Swansea said: “When we first went into lockdown, I wanted to show my support to families and decided to offer my services as a soloist. Music is an incredibly important and personal element of a funeral. It offers people the chance to pay tribute to a loved one’s personality and passions.

“Many families I support are so grateful that I am also able to help with that aspect of the funeral. It is heart warming to see the pride and emotion on people’s faces when they hear the favourite song of someone they love and miss so much. It is a privilege to sing to people who are grieving and it’s something that I plan to carry on doing.”

Mr Murray has been singing for over 20 years and was trained by his choirmaster at St Mary’s Church, Swansea, at the age of 13. Aged 16, James performed on the backing tracks of Katherine Jenkins’ album ‘Second Nature’ with the National Youth Choir of Wales, which she was also a member of for three years.

His proudest moment to date was singing a specially written piece by Karl Jenkins, with an orchestra conducted by Karl, in a massed choir with Bryn Terfel as the soloist, at the Royal Gala opening of the Wales Millennium Centre in front of the Queen, Prince Charles and the late Prince Philip in 2004.

The baritone singer has been fulfilling the wishes of families by singing live versions of hymns – one of the most popular choices being the welsh hymn Calon Lan – as well as Welsh choral classics, and well-known hits from bands including a version of Westlife’s ‘You Raise Me Up.

In June this year, the Church in Wales issued new guidance for congregational singing in churches, stating that group singing could resume in areas of Wales where Covid-19 cases were low.

But with certain restrictions still in place in churches and crematoria across the country, Mr Murray continues to receive requests from families to sing at funeral services..

Vicar of Oystermouth, Swansea, Canon Keith Evans, said: “Like many funeral directors across the country James has been one of our valued frontline workers who has cared for our loved ones during the pandemic.

“Blessed with a fine baritone voice, James has performed hymns and songs at most of our local funerals, transforming the services for so many families and mourners. Being able to listen to the comforting words of our ancient and modern hymns has meant so much to us all. I would like to say a heartfelt thank you to James for all he is doing for our community.”