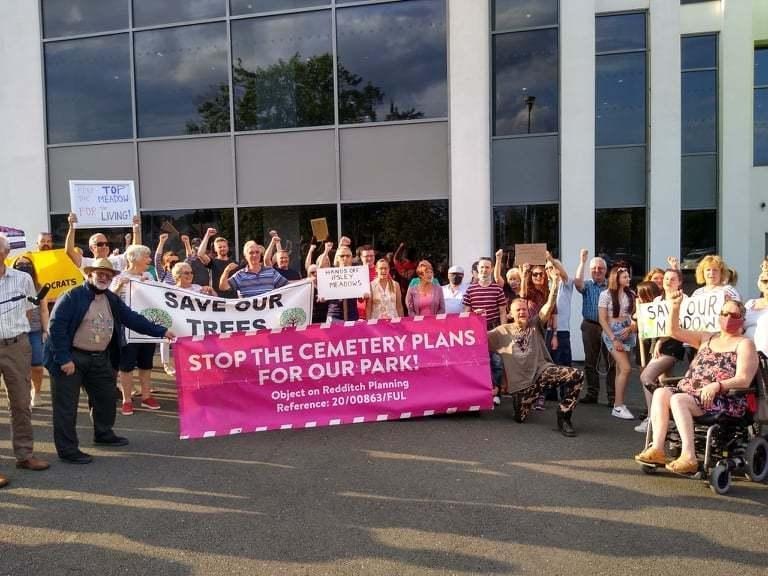 Planning officers at Redditch Borough Council are set to consider the controversial application to turn Ipsley Meadow into a cemetery.

The committee will consider the application for the site off Ipsley Church Lane at its meeting at Redditch Town Hall on Wednesday October 13 starting at 7pm.

The plan highlights that “space for burial is diminishing in the borough” and the cemetery could provide enough land for between 60 and 70 years of use.

Over 800 people have objected to the plans and campaigners organised a protest in July against the destruction of green spaces in Redditch, specifically Ipsley meadow.

Retired planner Ivan Willcock, who attended the protest, said the council has “backed itself into a corner” over the cemetery plans.

He says that expanding the Abbey Cemetery will be “cheaper” and “more efficient.” Mr Willcock has highlighted several fields and areas around the site that could be used for cemetery land.

“They already have existing car parks there, they have proper access,” he added.

Redditch Labour has also voiced their concerns about the plan.

Sharon Harvey, communications officer for Redditch Labour said: “We know there is an urgent need for more burial space, so we are calling on Cllr Dormer to investigate alternative sites in Redditch without delay.”

Independent councillor for Matchborough and Ipsley, Juliet Brunner said “Residents will be disturbed by extra traffic from hearses and mourners driving to the proposed site.

“The Meadow land is part of Arrow Valley Park.

“The park was gifted to the residents of Redditch by the Development Corporation for recreational pursuits.

“The meadow is well used by residents and has a great array of wildlife.

“The view is particularly pleasing to the eye at any season it would be a travesty if it was lost.”

Due to the significant public interest and the venue’s limited capacity the planning meeting will also be live streamed via the council’s YouTube channel.