A funeral director is set to get married after her admirer spotted her giant face on a billboard advert.

Louise Cook, a funeral director at A.W. Lymn in Long Eaton, will marry Mick Bramman, who stole her heart after sending her a photo of himself next to her face on a company billboard in the town.

“Mick first reached out to me on Facebook after sharing mutual friends, asking if I would like to go out sometime,” said Ms Cook. 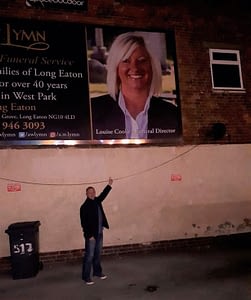 “I initially didn’t think much of it. Then, the next day, I received another message from Mick, and, to my surprise, it was a photo of him underneath the Lymn’s billboard I was in.

“I thought it was hilarious, here he was, posing underneath the huge billboard of my face. He certainly put a smile on my face, so I agreed to the date and two years later we’re engaged.”

The wedding, which is set for December, will take place in the chapel located in the cemetery grounds of the funeral home Ms Cook works at, at West Park House, in Lime Grove.

Special permission was granted to the bride-to-be, making it the first wedding to take place in the chapel.

Ms Cook described the venue as the perfect setting for the pair, after working for the company for 18 years.

Chris Anastasi, sales manager at Starlite Outdoor, who produced the billboard for A.W. Lymn, added: “We can’t believe our billboard has created such a love story.”