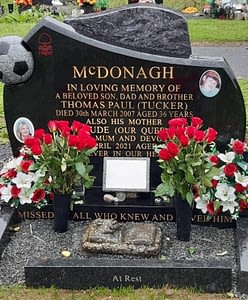 A ‘disastrous’ funeral which took place at Belfast’s Roselawn Cemetery in April 2021 is to result in compensation being paid to relatives by Cemetery owner Belfast City Council.

Maud McDonagh, 73, was buried at Belfast’s Roselawn Cemetery on April 9 this year but despite accurate measurements supplied by Funeral Directors Cemetery staff had not dug the grave of sufficient width to allow the burial of the coffin.

In attempting to complete the burial at the ceremony according to relatives Mrs McDonagh’s coffin was ‘covered in muck’ and damage resulted to the existing marble surround of the family plot.

Mrs McDonagh’s  grieving family – including her children Stevie, Matthew, Angie, Linda and Mandy – witnessed her coffin getting stuck and the grave being widened by cemetery staff in front of shocked family members.

The family were left deeply distressed by the incident and said they wanted to prevent another family going through what they had to endure earlier this year.

Daughter Stevie describved the incident:  “When the undertakers started to lower mum’s coffin into the ground you could see that the coffin had got stuck in the grave.

“Then they started digging the grave wider in front of us. The whole thing was just a complete shambles.”

His sister Linda, 42, said she still has nightmares about the events of that “absolutely horrifying” day.

When the family returned to Maud’s graveside several days later, they discovered that some of the existing black marble surround was missing.

“We had a marble surround and four small posts in place but these now cannot be found,” Stevie, 53, explained.

“We have been told that the surround had to be removed to allow the machinery to open the grave and were placed at the side of it.”

The family believes the cornerstones were mistakenly buried in the soil.

Belfast City Council has since formally apologised to the McDonagh family, saying the circumstances of their mother’s burial “were not correct”.

In a letter seen by Belfast Live, the council said: “It is recognised that the surround is the property of the family and that the four cornerstones may have been misplaced while under our control, while we were digging the grave.”

As a gesture of apology the council’s burial fee was waived and the local authority has also since agreed to provide compensation totalling £170 for the lost cornerstones.

Stevie said: “This has been going on for five months now so we just want to get our mum’s grave all fixed up again to the standard it was before she was laid to rest with our young brother in it.”

In a statement, the council said its officers “are working with the funeral director to resolve this for the family”.